The Modi Persona: Life and times of an inspirational icon

A distinct Modi persona is his selfless nature and great affection for his country and its people.

"I am an optimist, only an optimist can bring and instill hope in the country. we will leave pessimism behind. The meaning of democracy is not limited to electing a government, it is for the 1,25 crore citizens to work together."...... Narendra Modi

India's most respected and beloved Prime Minister Narendra Modi was born in Vadnagar, Gujarat on 17 September 1950. His life, from childhood to the time when he became prime minister, has been very well covered in a Coffee Table Book, "Narendra Modi - The Making of a Legend" that was commissioned by Sulabh International in 2017.

The book narrates that young Narendra was born in a family of limited means and was the third of six children. He sold tea at the Gujarat railway station to supplement the meager income of the family. His school teacher, Prahlad Patel, describes him as a hard working student, very fond of participating in debates, etc and also a keen NCC cadet.

Young Narendra was inducted into the Rashtriya Swayamsevak Sangh (RSS) by Lakshman Rao Inamdar in 1958, when he was around eight years old. However, he became a full time Pracharak much later in 1971, and then too, Inamdar was his mentor. In the intervening period, he completed his schooling and then pursued an ascetic life for about three years where he was influenced by Swami Vivekanand and the Ramakrishna Mission.

In his initial stages as a Pracharak, in 1973, Narendra Modi was keenly involved in the Navnirman movement against rising prices. During the period of Emergency almost all big leaders of the BJP and the Sangh were imprisoned and the responsibility to create a mass public movement and resistance to government atrocities fell upon Narendra Modi and a few others. He created the Gujarat Lok Sangarsh Samiti and carried out underground activities quite successfully. 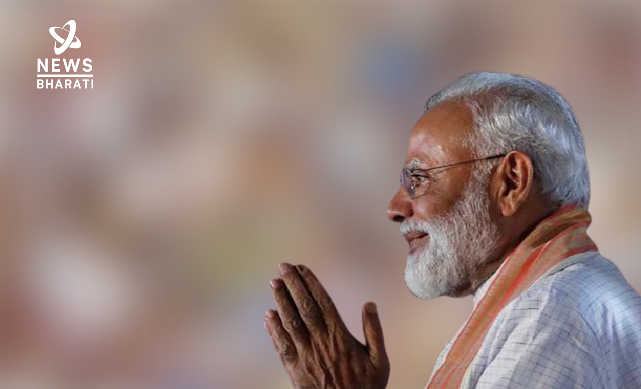 In the aftermath of the emergency, Modi was seconded by RSS to the Bharatiya Janata Party (BJP) where he got keenly involved in the resurgence of the party. In 1990 he was a part of the Somnath to Ayodhya Rath Yatra conducted by Lal Krishna Advani and later the Ekta Yatra from Kanya Kumari to Lal Chowk in Kashmir along with Murli Manohar Joshi. Later, he became Organisation Secretary of Gujarat and National General Secretary of the BJP in 1995.

He was appointed chief minister of Gujarat in 2001, an appointment that he held uncontested for 12 years plus by winning all state elections with a comfortable majority, such was his level of popularity in the state. His tenure as chief minister has been most aptly explained in a simple statement by one Zakir Hussain, owner of Mughlai food restaurant in Ahmedabad. "Law and order is under control, people move freely, I no longer have to pay Hafta. Government has become simple and transparent," said Hussain. Simply put, the Modi government in Gujarat created a free atmosphere for the people to work and progress - as the people progressed, so did the state.

The emergence of Narendra Modi as a national leader began in 2013 when he highlighted development as the key result area of the BJP and firmly rejected vote bank politics. The Modi persona stuck the imagination of the Indian voter and his party declared him as the prime ministerial candidate at the Goa conclave on 7 June, 2013.

The 2014 election campaign spearheaded by Narendra Modi is often described as a "new age" campaign that focussed on both local as well as national issues. it was dominated by succinct events like "Chai Pe Charcha" and buzzed around the slogan of "Sabka Saath, Sabka Vikas." The election was fought around core issues of security (Kashmir, China, Pakistan), corruption, black money, Italy connect, falling Rupee, vote bank politics, migrants from Bangladesh and associated issues.

"India has won," tweeted prime minister designated, Narendra Modi, once the election results were declared and his party, the BJP, emerged as a victor with an unprecedented majority.

About 20 days after his birthday, on 7 October 2021, Prime Minister Narendra Modi will complete 21 continuous years as head of a democratically elected Government, 12 Plus as chief minister of Gujarat and the remainder as prime minister over two terms, the second of which is ongoing.

With the intention of marking this iconic journey as a source of inspiration for future generations, Bluekraft Digital Foundation has published a book, "Modi@20 - Dreams Meet Delivery." The book contains five sections and 21 Chapters with each chapter written by a domain expert. Issues pertaining to social and political impact, economic policy, governance and foreign affairs among several others have been covered in the book.

"He has no attachment to power, he stands out because people trust him, they know that however hard the challenge he will work with the best intent and resolve it," says Lata Mangeshkar about Prime Minister Narendra Modi in the foreword of the book.

The international badminton player, PV Sindhu, in the first chapter of the book, has defined the prime minister as an undisputed youth icon of India because of his attitude of "Hoga Kaise Nahin."

"India is a civilisation state more than a nation state, most leaders are chary of seeing it as such but not Modi. he is clear and unapologetic about our roots," says the famous Indian novelist and intellectual Amish in the book. This thought process is now very clearly visible from the vision that the prime minister has articulated in his speech on Independence Day, 2022.

The writers have mainly covered the people-centric policies that the prime minister has pursued in his political career both as chief minister and prime minister.

Prime Minister Narendra Modi is a great proponent of the spirit of "Shakti" which translates in his government into Jal Shakti, Raksha Shakti, Ujra Shakti and Gyan Shakti among others. The concept is further strengthened with focus on infant mortality, women empowerment, cleanliness, tree plantation, electricity, agriculture, Tribals and sports. On his conviction of providing clean and hassle free governance he, at the outset, gave directions for the shredding of 11000 files in his office and repealed 32 irrelevant acts from the Constitution.

A detailed reading of the book highlights a distinct Modi persona. The inspirational aspect of the persona is his selfless nature and great affection for his country and its people. These traits have been honed over the years by his spiritual bent of mind developed as a young man in the company of Sadhus/Saints and later as a Pracharak of Rashtriya Swayamsevak Sangh (RSS) which continues to be his main identity even today.

The prime minister is further defined in the book as a man who leads a simple and humble life but maintains indefatigable energy and unstinted loyalty to the causes of human alleviation that remain so close to his heart. He is known to possess a phenomenal memory, is a good listener and fast learner, and above all an incorruptible individual who maintains the highest level of personal integrity in all dealings.

In his work ethos, the prime minister maintains a bottom-up approach to governance in which the consultation process starts from Booths to Panchayats and upwards through the states to the center. He interacts with party workers at all levels with equal ease and respect. He gives very logical explanations to concepts and policies while remaining issues based on his political ideology. This facilitates better decision-making at all levels.

Prime Minister Narendra Modi is very adept at finding an opportunity to move forward even under the most difficult circumstances. While fighting the tremendous challenge of COVID he also evolved the concept of Atmanirbhar Bharat and applied it in the production of PPE kits, masks and finally vaccinations. He remains personally involved in all projects and, in fact, micro-manages them with frequent visits and briefings in which he motivates the project leaders and gets the best out of them.

The exponential increase in the prime minister's personal appeal in Politics has been mirrored in the BJP's geographical and social expansion. He is the catalyst who has driven and accelerated the popularity of the party across India, says Union Home Minister Amit Shah in the book under reference.

In the modern evolving India there is no option other than following the Modi model of governance for taking the country forward as one with a strong economy and international stature. Even opposition parties will have to pursue this model if they wish to stay on course in developing the Nation and even maintain their political relevance. It, therefore, would be best to learn from the prime minister and follow in his footsteps.
PM Narendra Modi Modi Persona COVID Atmanirbhar Bharat Politics BJP