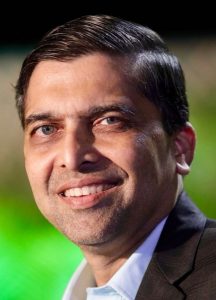 India celebrates her ‘Republic Day’ on 26 January each year. Less known is the fact that from 1930 to 1947, this day was observed as ‘Independence Day’. Critics of the Rashtriya Swayamsevak Sangh (hereafter Sangh) accuse the organization of staying aloof from Republic Day celebrations. It was on 26 January 1930 that Purna Swaraj Day (Day of Complete Self-rule) was first observed. From 1950 onwards, the day is celebrated as ‘Republic Day’.

The present article seeks to answer these questions on the basis of contemporary documents in the Sangh archives and news items in the Marathi newspaper Kesari.

In any case, why was 26 January chosen as ‘Republic Day’? 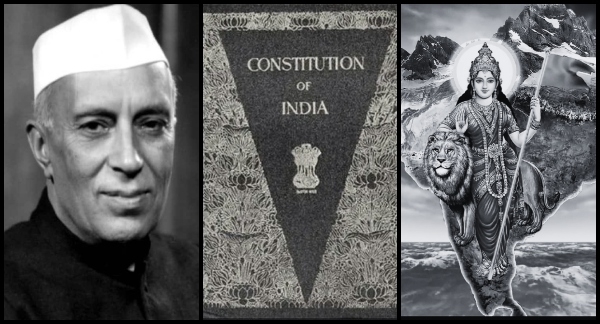 Birth of a republic
The Indian Independence Act of 1947 partitioned Undivided India into two independent dominions of India and Pakistan on 15 August 1947. The Constituent Assembly of India took over the legislative functions of the Dominion of India from the Imperial Legislative Council. It approved the Draft Constitution on 26 November 1949. A suitable date for the Constitution to take effect now remained to be chosen. It was clearly convenient to choose some date in early 1950. Choosing the first day of the New Year would be seen to be aping the erstwhile rulers. Choosing the last day in January would be perilously close to the date of Gandhi’s assassination. Any other date in January would do. Under Jawaharlal Nehru’s stewardship some twenty years back, the Indian National Congress (INC) had randomly chosen 26 January 1930 as Purna Swaraj Day (Kesari, 27 January 1950). 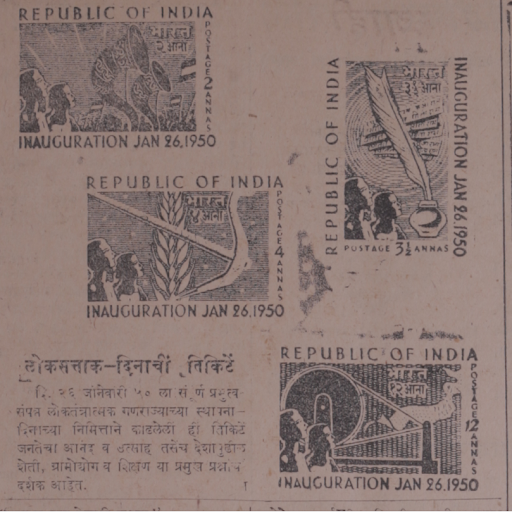 It had taken 1930 for the INC to finally adopt Complete Independence as its creed. For the previous five decades, hundreds of nameless revolutionaries and their families had been facing death, deportation, imprisonment and forfeiture of property for the cause of Complete Independence. Giving short shrift to the revolutionaries, a day that was historically significant for the Congress in general and Jawaharlal Nehru in particular was chosen to herald the sovereign, democratic Republic of India.

A two-day period of national rejoicing was announced on 26 and 27 January 1950 to mark the birth of the new Republic. How did the different players in India’s political spectrum view the establishment of the new Republic? Given its political dominance, the INC was understandably upbeat. Using the Gandhi murder as a stick, Nehru was engaged in crushing Hindu revivalist groups represented by the Akhil Bharat Hindu Mahasabha (ABHM) and the Sangh. These groups had no place in his vision of national conciliation, assuming there was one. Their foremost leader Vinayak Damodar Savarkar had undergone a trial by fire in the Mahatma Gandhi Murder Case and had been released from jail less than a year before.

Yet, in a remarkable statement, Savarkar said, “Every citizen whose loyalty to our motherland is above suspicion, unconditional and whole-hearted cannot but join rejoicingly in the national celebrations on that day to commemorate the emancipation of our motherland from the British bondage. Let us sink our petty squabbles over provincialities, personalities and party platforms on that day and present a trailed front on the only one and common platform – the platform of our motherland-proclaim our national victory to the world…” (Bombay Chronicle, 5 April 1950). The ageing Savarkar placed his services at the disposal of the new President Rajendra Prasad.

The Vice-President of the ABHM and Chairman of its Parliamentary Board Ashutosh Lahiri had suffered incarceration in the Andamans for the cause of India’s Independence. He now exhorted all local Hindu Sabha units to participate and cooperate in the festivities related to the adoption of the new Constitution (Kesari, 24 January 1950). At a meeting in Mumbai held on 27 January, the Working Committee of the ABHM passed a resolution welcoming the Indian Republic (Kesari, 31 January 1950).

The birth of the new Republic caused resentment in some quarters. The Communists staged a protest march in the Kala Chowki area of Mumbai on 26 January. When the police asked the Communists to turn back, they hurled acid bombs on the police. Two police inspectors sustained injuries. Police fired four rounds injuring eight people. Around 55 Communists were rounded up (Kesari, 27 January 1950). Communists descended on flag-salutation ceremonies in Colaba area in Mumbai and urged those assembled to hoist black flags. This led to a brief skirmish. (Kesari, 31 January 1950).

The Kesari reported that “there were instances of black flags being hoisted on the offices of Forward Bloc, Peasants and Workers’ Party and other organizations on 26 January. The Communists, too made abominable attempts to sully the festivities in cities such as Mumbai and Calcutta” (Kesari, 3 February 1950).

A Republic Day procession was halted in front of a mosque in Kamptee (Central Provinces) because it was playing music. Stones were hurled at the picture of President Rajendra Prasad. The procession was allowed to proceed only after the music was stopped. Participants were attacked on their return journey by ‘lathi-wielding non-Hindus’ and it was only the presence of armed soldiers that averted a riot (Kesari, 6 February 1950). 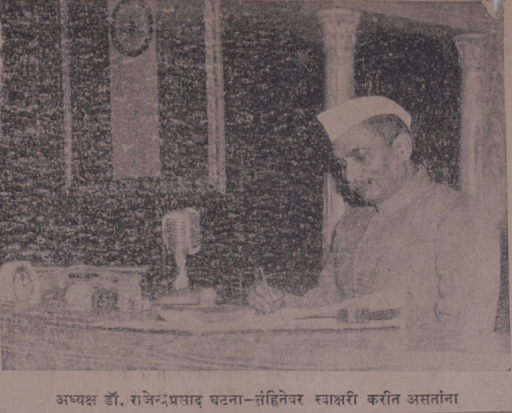 The Kesari (24 January 1950) announced that “volunteers of the Congress Seva Dal, Boy Scouts, Rashtriya Swayamsevak Sangh and other organizations would take out prabhat pheris (morning processions) at the dawn of 26 January… The different processions would meet on the grounds of Pune’s historic Shaniwar Wada.” The Kesari further reported that young and boy Sangh swayamsevaks had participated in the two-day festivities with the same pride as that of the Congress Seva Dal and the Socialist Rashtra Seva Dal (27 January 1950). Reporting on the Sangh programme in Mumbai, the Kesari remarked, “The impressive flag-salutation ceremony of the Sangh took place in Chowpatty on the morning of 26 January. Its grandeur and discipline put to shame even the army and police” (31 January 1950). 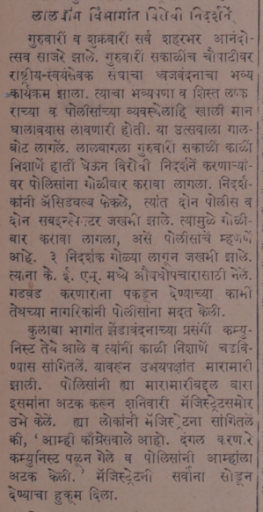 News of Sangh celebrations to mark the first Republic Day is documented in places such as Jalandhar, Gurdaspur, Kharad, Bhilwara, Ambala, Rohtak and Indore. In Indore, the Sangh organized a unique function on the morning of 26 January 1950. Scores of beggars (including women) were honourably fed on the occasion with swayamsevaks doing the work of serving food.

Speaking on the occasion, the Secretary of Indore Sangh Pandit Ram Narayan Shastri (who became Prant Sanghachalak of Madhya Bharat in later years) remarked, “We desire that your condition should change as early as possible. We desire that the auspicious day should soon dawn when no one remains hungry or naked. Let it so happen soon that you should be in a position to be able to feed us. Do not consider yourself to be beggarly or fallen, rather that you are the kings of this country” (Akashvani weekly, Jalandhar, 5 February 1950). 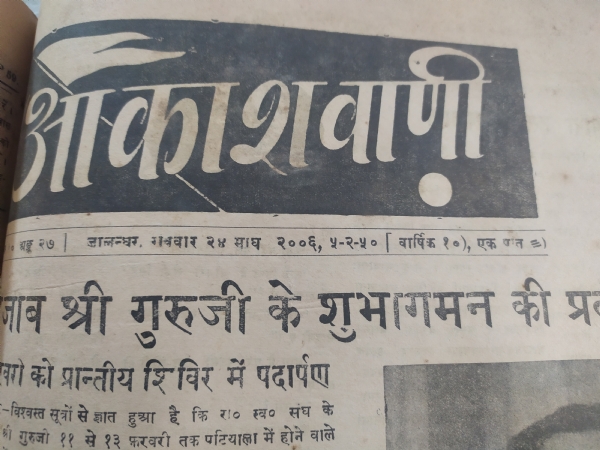 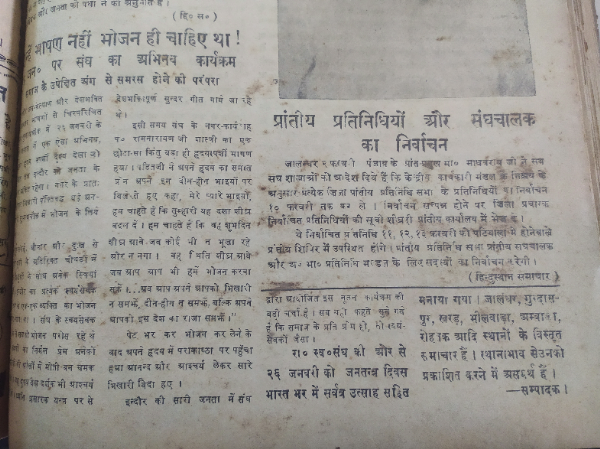 The Secretary of the All India Congress Committee Jawaharlal Nehru placed the Independence Resolution at the Madras session of the INC on 27 December 1927. The resolution read thus, “The Congress declares the goal of the Indian people to be complete national independence" (Report of the forty-second Indian National Congress held at Madras 1927, The Reception Committee, The Forty-second Indian National Congress, Madras, p. 15).

The resolutions on Independence and boycott of British goods) were not to Gandhi’s liking (D.G. Tendulkar, Mahatma: Life of Mohandas Karamchand Gandhi, Vithalbhai K. Jhaveri and D.G. Tendulkar, Mumbai, 1951, Vol. 2, pp.402, 429-430). Hitherto, colonial self-governance had been the INC creed which INC President Mukhtar Ahmed Ansari clarified in Gandhi’s words to be "within the Empire if possible, without if necessary" (Madras Congress Report, Appendix 1, p.3).

Differences regarding the INC creed came to the fore at the Calcutta session of the INC held from 29 December 1928 to 1 January 1929. Srinivas Iyengar, Jawaharlal Nehru, and Subhas Bose supported the idea of Complete Independence, while Gandhi and INC President-elect Motilal Nehru were champions of Dominion Status. It was on the basis of Dominion Status that Motilal Nehru prepared his report regarding the future Constitution of India at the instance of the All-Parties Conference. Motilal Nehru made it clear that he would not preside over Congress if he could not have a majority for the resolution in favor of his report.

Gandhi struck a middle path and proposed that “the Congress shall not be bound by the Constitution, if it is not accepted on or before the 31st of December 1930 and provided further that in the event of non-acceptance by the British Parliament of the said Constitution by that date, the Congress will revive non-violent non-co-operation (Tendulkar, pp.439-440).

Before Gandhi’s deadline could expire, Viceroy Lord Irwin declared on 31 October 1929 that the natural issue of India's Constitutional progress was the attainment of Dominion Status. Despite this grand declaration, the Viceroy told Gandhi, Jinnah, and others who met him on 23 December that “he was unable to prejudge or commit the (Round Table) Conference at all to any particular line.” Thus, no guarantee of immediate Dominion Status was forthcoming. Stating that he had burnt his boats, Gandhi now declared himself definitely for Independence. The choice of Jawaharlal Nehru as President of the Lahore session of the INC in December 1929 contributed to the intense fervour all over the country over the impending declaration of Independence (R.C. Majumdar, History of the Freedom Movement in India, Firma K.L. Mukhopadhyaya, Calcutta, Vol.3, pp.322, 325).

At the Lahore session, Gandhi now declared that the word Swaraj in Article 1 of the Congress Constitution shall mean Complete Independence and that the entire scheme of the (Motilal) Nehru Committee’s Report had lapsed, and hoped that all Congressmen would henceforth devote their exclusive attention to the attainment of Complete Independence for India “(Indian National Congress, Report of the 44th Annual Session Lahore, Reception Committee, p.88).

In order to hold up the ideal of Independence before the nation, the INC Working Committee decided on 2 January 1930 that 26th of January be observed all over India as the Purna Swaraj Day (day of Complete Self-rule). A manifesto, prepared by Gandhi and adopted by the Working Committee, was to be read on that occasion to the people in the villages and towns all over the country, and the assent of the audience was to be taken by show of hands (Majumdar, p.331).

Where was the Sangh in the midst of this nationwide fervor for Complete Independence? That needs a separate article.

The author is a Pune -based endocrinologist and diabetologist. He has co-authored two books on diabetes for lay readers. He has also authored books on Islam, contemporary Buddhist-Muslim relations, religious demography of India and the Savarkar brothers. He has edited two volumes on Dr. Hedgewar and Balasaheb Deoras, based on archival material. He has made a major contribution in developing www.savarkar.org and www.golwalkarguruji.org