Fielding Sadhvi from Bhopal: A shock treatment by BJP for protagonists of Hindu Terror 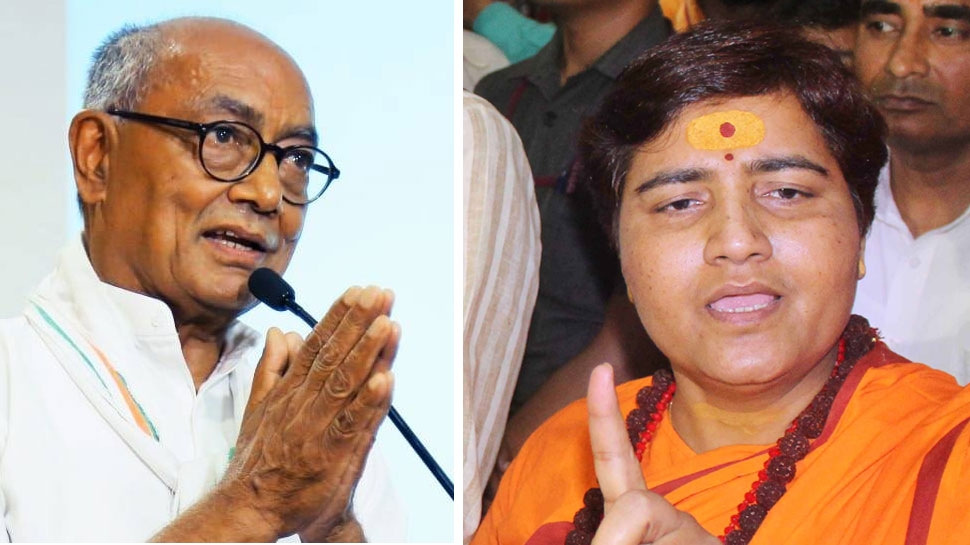 Declaring the candidature of Sadhvi Pradnya Singh Thakur as its official candidate to challenge Digvijay Singh a Congress stalwart, former chief Minister of Madhya Pradesh and known as ‘Chanakya’ of Congress party, the BJP has taken both its supporters and opponents by surprise. While the opposition camp is shocked and raised a hue and cry over Sadhvi’s candidature, for the supporters it came as welcome surprise. However, the shock opposition parties received was so strong that they are yet to make compromise with the reality. Instead, they are busy demanding withdrawal of the Sadhvi from the election battle field.

Sadhvi Pradnya Singh Thakur will be facing Digvijay Singh of Congress in Bhopal in the last but one phase of the seven phase Lok Sabha elections to be held on May 12. She was accused in Malegaon bomb blast case and was arrested in 2008 during the UPA rule. It was with her arrest the term ‘Hindu Terrorism’ or ‘Saffron Terrorism’ was coined by none other than Digvijay Singh, P Chidambaram, Sushil Kumar Shinde and was widely used by the left-liberal-secular intellectuals, journalists and writers to defame the surge of Hindutva movement headed by Rashtriya Swayamsevak Sangh (RSS) in the country.

The most stunning defence of the Sadhvi came from none other than the Prime Minister Narendra Modi himself. In an interview to ‘Times Now’ on Friday, Prime Minister Modi without mincing words defended the fielding of Sadhvi Pradnya Singh Thakur as a “symbolic reply to all those who tried to tarnish the image of Hindu Dharma, Culture and Civilization as ‘terrorist’”.

Referring to the NIA Court verdict in Samjahuta Express bomb blast acquitting all the accused and giving them clean chit, Modi said that Congress has tried to malign the 5000-year-old Hindu culture that spread the message of “Vasudhaiva Kutumbakam” and “Sarvepi Sukhinah Santu- Sarve Santu Niramaya” as “terrorist”. To give a proper reply to them we have fielded this symbol and this will cost the Congress dearly”, Prime Minister Modi said.

Following her arrest the Sadhvi was made to undergo inhuman atrocities and she was subjected to harsh punishments for days together. She had suffered physically due to these harsh beating by the cops. She spent nine years in incarceration and no charge sheet was filed against her. Finally, it was National Investigation Agency (NIA) that took the charge of the case and released her absolving her of all the charges. However, she is still undergoing the legal case under the Unlawful Activities Prevention Act and is currently out under bail.

Her candidature against the Congress stalwart Digvijay Singh immediately came under fire from the liberal-secular gang of intellectuals, journalists and writers. But the Prime Minister has silenced them by strongly justifying the candidature of Sadhvi Pradnya Singh Thakur.

Invoking the Samjhauta Express blast case verdict the Prime Minister said that it was evident that the Congress and its liberal-secular-intellectual gang tried to malign the most accommodative and humane culture and civilization evolved by the Hindus for thousands of years by drubbing them as terrorists.

Referring to the mindless violence of 1984 against the Sikh community in the aftermath of the then Prime Minister Indira Gandhi’s assassination, Modi said that even Rajiv Gandhi had justified the killing of innocent Sikhs by saying that when a big tree falls, the earth shakes. Was it not an act of terror, the Prime Minister asked and said that Rajiv Gandhi was rewarded by making him the Prime Minister. Many of those Congress leaders involved in that killing were made MPs and one amongst them is now Chief Minister of a state, and the neutral media never asked a question like it is asking now, the PM said taking a dig at the media today.

The 1984 anti-Sikh riots took the toll of 2733 lives and 541 cases were registered against those Congress leaders including incumbent Madhya Pradesh Chief Minister Kamal Nath who was acquitted due to lack of evidence by the Nanavati Commission.

Why the media is not applying the same yardstick to Amethi and Rae Bareli candidates who are out on bail and contesting elections. Why they are not questioned? But when the BJP fields a candidate who is on bail from Bhopal immediately a hue and cry was raised? No media raised a finger when a women that too, a Sadhvi was tortured, he said. Both Congress President Rahul Gandhi and his mother Sonia are on bail in National Herald case.

Modi said that the Congress has a ‘modus operendi’ and he is well aware of that since his days in Gujarat as Chief Minister of that State. Explaining, he said “first the Congress writes a script like a film script by catching hold of something and exaggerating it. Add a villain and a hero to the narrative and throw it into the public domain. Every encounter or incident was scripted in this manner by them.

Senior RSS leader Indresh Kumar who is also patron and guide of Muslim Rashtriya Manch and various other organizations has defended the Sadhvi. Talking to Zee News Indresh Kumar said that the Sadhvi was arrested on false charges of Hindu terror and subjected to inhuman torture. Now all those accusations were proved wrong in the court and she is out on bail and thus she cannot be stopped from contesting polls.

He said that those who leveled the allegations of Hindu terror have committed a serious sin and the leaders like Digvijay Singh should seek pardon from the Sadhvi by withdrawing from the contest.

The style and language the reactions from anti-BJP camps are pouring in over the candidature of Sadhvi Pradnya are indicative of their fear of losing the elections. They have tried to confuse the voters by building such false narratives over the years and now they stand exposed. It is this agony that is visible from these reactions.

They are trying to stop Pradnya Singh from contesting election on the ground that she is an undertrial. They approached the election commission in this regard but to their dismay the ECI ruled that Sadhvi is not criminal. She is only an accused and thus we cannot stop her from contesting elections. Now they have rushed to the courts. One Nisar Sayeed, father of one of the persons killed in Malegoan mosque blast has approached the NIA court to cancel her bail which she got on health ground as she is fit enough to contest polls. Whatever the decision court might give, one thing is sure that defeat is staring at Digivijay Singh with all certainty.

The BJP has brought the issue of ‘Hindu Terrorism’ at the centre-stage of public discussion in the midst of general elections by fielding Sadhvi Pradnya from Bhopal. As the saying, not all Muslims were terrorists, but all the terrorists caught or killed were Muslims, had disturbed most senior Congress leaders during the UPA rule of past decade. They and their liberal-secular-left intellectuals, journalists, writers, human rights-wallahs were all disturbed about the future of Muslims and more particularly the future of their Muslim Vote Bank. So they hatched a conspiracy to brand the Hindus as terrorists and coined the term ‘Hindu Terrorism’ or ‘Saffron Terrorism’.

The then Home Ministers P Chidambaram and later Sushil Kumar Shinde made conclusive allegations of Hindu Terrorism implicating RSS and other Hindu organizations for terror violence and arrested some Hindu leaders like Sadhvi Pradnya Singh Thakur, Swami Aseemananda and others and inflicted on them inhuman torture and atrocities. They were supported by selfish and Hindu baiter politicians like Sharad Pawar and Digvijay Singh who started propagating that Hindus too are terrorist and involved in terror acts, and that it was wrong to blame Muslims alone for such acts. By doing so Congress has indulged in a major sin and now the Hindus have a golden chance to teach a befitting lesson to these Hindu-baiters in this election. Bhopal should prove to be the beginning of the end of the Congress.

The Sadhvi should also observe restraint while going to people for votes. People are also equally angry with what was done to her in the police custody and will not spare the perpetrators and their political masters. But she should have the roadmap of development of Bhopal and be able to spread that map before the people so convincingly that would attract the voters both Hindus and Muslims to her.