Here comes the first episode from our exclusive interview with Dr. Koenraad Elst who emphasized how Muslims behave to criticism of Islam, in the context of the Nupur Sharma episode.

As announced earlier, News Bharati hosted Dr. Koenraad Elst for an Exclusive interview regarding his views on the Hindutva movement in India, Islam, Christianity, and the political history of India. 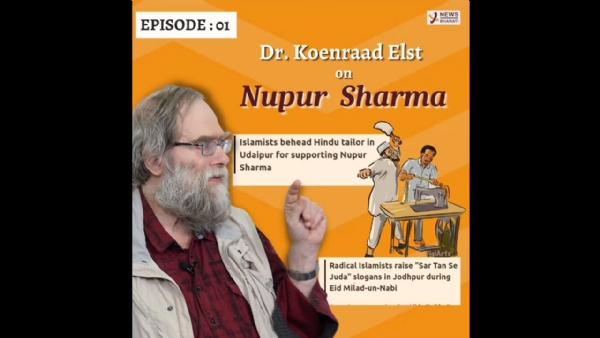 Who is Dr. Koenraad Elst?

Born in Belgium in a Catholic family, Dr. Koenraad Elst has earned MA degrees in Sinology, Indology and Philosophy. Sinology, or Chinese studies, is an academic discipline that focuses on the study of China primarily through Chinese philosophy, language, literature, culture & history. Indology, also known as South Asian studies, is the academic study of the history and cultures, languages, and literature of the Indian subcontinent, and as such is a subset of Asian studies. In the Netherlands, the term Indologie was used to designate the study of Indian history and culture in preparation for colonial service in the Dutch East Indies.

With support from his family of four, Dr. Elst has worked as a Journalist and Columnist in Foreign Affairs, mostly freelance, punctuated by stints as an 'Assistant' in the Belgian Senate and as a 'Guest Professor' in two reputed universities of India. His then-dissident findings on Ayodhya made him a target of 'cancel culture', but also opened the doors of Hindu assertion for many stalwarts. He has played a pioneering role in the "Aryan Homeland" debate.