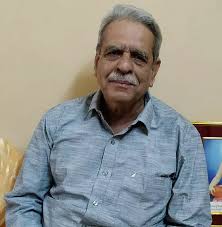 Moreshwar Joshi has been working as a special correspondent of Tarun Bharat for the last fifty years. He has written 5,000 articles on Christian missionaries in the last fifty years.  From 1990 to 2000, he has worked for an English newspaper as well as from 1994 to 2005, he worked in audio-visual media. He has written 100 articles based on the book 'Breaking India', in which Jihadis, Maoists, Separatists Dravidians, and churches in the Northeast are working together in India for Panchajanya Hindi weekly magazine. He has written 20 articles in Vivek's weekly magazine in 2014, after traveling to ten European countries and came to know that Christians became a minority in countries of 'Europe, America, Russia, Australia'. He has written 150 articles on cattle science in the Sandhyananda newspaper. Apart from this, 150 articles in other publications on the same subject.

If one considers the amount of meat is produced across the world, half of it comes from cow slaughtering. Out of this meat, half of it is supplied from Indian cattle...

Everyone knows that the coronavirus pandemic took place due to the mismanagement of the meat. However, everyone is so engrossed in mitigating the pandemic that they have not been able to identify the root cause of the pandemic...